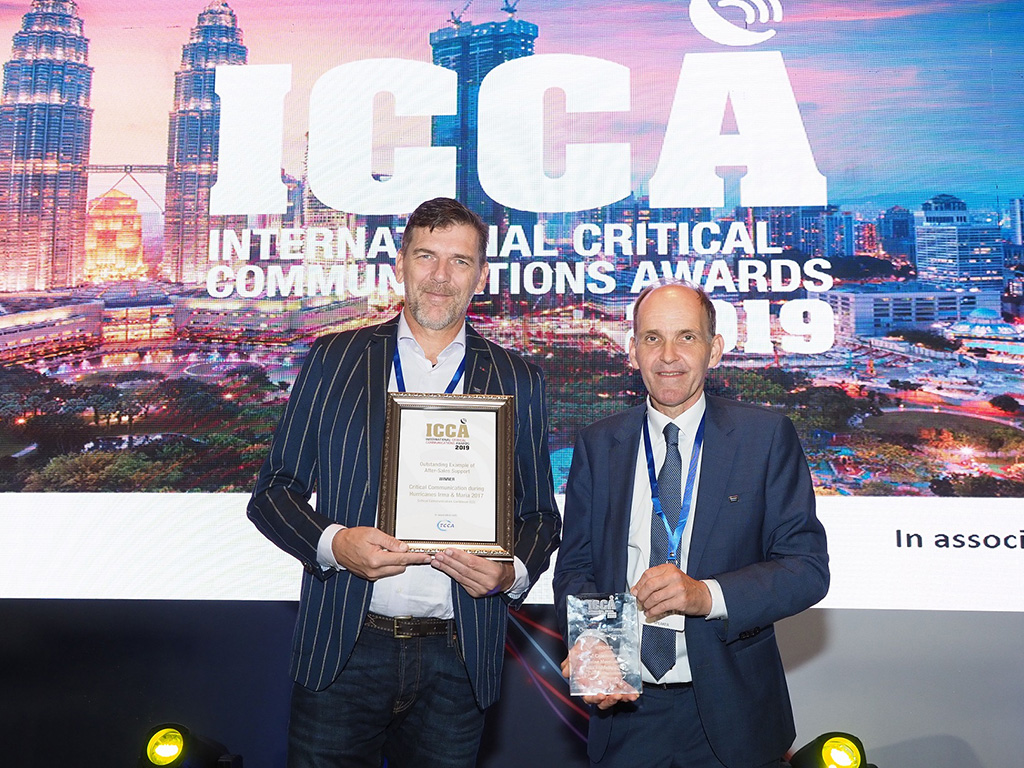 WILLEMSTAD – On Tuesday, June 18th, C3 (Critical Communication Caribbean) was announced as the winner of the International Critical Communications Award 2019 in the category ‘Outstanding Example of After-Sales Support’. C3 received the prestigious award because of its important work during and after hurricanes Irma and Maria on St. Maarten, for which it was also nominated in the category ‘Best Use of Mission-Critical Communications During a Major Event’. The award was accepted by Bert Schreuders, Managing Director of C3, during a ceremony in Kuala Lumpur, Malaysia. Mr. Schreuders dedicates the prize to C3’s entire St. Maarten team and states “To receive this international recognition for this accomplishment is a tremendous honor. I also want to recognize Rohill, as the supplier of our robust Tetra network to make this possible.”

Why did C3 receive this award?
On September 6th, 2017, the islands of St. Maarten, St. Eustatius and Saba were devastated by Irma, a category-5 hurricane with winds of 182-mph. Two weeks later, a second category-5 hurricane followed, bearing the name Maria. Essential communication on St. Maarten was hampered by lack of power, back-up batteries that ran out and generators needing to be refueled under difficult circumstances. The devastation and chaos had shocked the community, which made it hard for authorities to maintain safety and order. Three hours after Irma (as soon as the government provided clearance), C3 took action and – after a lot of hard work – successfully re-enabled emergency services to communicate without interruption. This helped the entities to coordinate their actions, deal with urgent situations, maintain law & order in the face of trauma, combat vandalism, and even save lives. According to the judges, C3 has shown “the critical skills and knowledge to deal with major events like category 5 storms”.

About C3
C3 (previously known under the name Zenitel) has been active in critical communication for 80 years. Since 2005, it has been facilitating a TETRA network (Terrestrial Trunked Radio) for police and fire departments, ambulance services, refineries, prisons, air- and seaports, and other organizations that need to be able to communicate under all circumstances, even when conventional networks are down. This C3 TETRA network was modernized in 2017 to continue secure mission-critical communications for the public safety sector in the Dutch Caribbean. C3 has offices on Curaçao, Aruba and St. Maarten. It represents leading brands such as Motorola, Sepura, Hytera, and Iridium. C3 is committed to continuous innovation, modernization, and improvement. This is why it always utilizes the latest technologies. The result is reliable communication, anywhere and in any situation.

More information about the organization is available at www.C3.cw

C3 turns to ATDI to validate their mission-critical networks